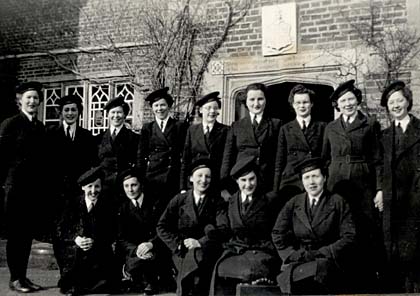 One of the interesting things about revisiting an attraction like Bletchley Park is seeing it evolve over time, not only from investment, but also evolution in understanding in what was done!

When I first visited Bletchley Park with the group in 2007, it wasn’t getting many visitors, it was very run down, a lot of the huts were abandoned, there were weeds growing everywhere and you could only really visit the mansion and two other buildings. Unbelievably, the park also didn’t have an Enigma machine on display!

Things have slowly changed – The park got a £25m investment in 2012 by the UK government, plus investment from Google and other companies. The ITV series; The Bletchley Circle (ran from 2012-2014 – they filmed the series at the park and the T.V company that made it, paid for one of the huts to be refurbished) and the film; The Imitation Game which came out in 2014, both highlighted what was done at the park during WW2 and increased public interest.

When the group visited in 2013, the park was all about Alan Turing, his name and what he did was everywhere in the park, almost like he cracked the codes all by himself. Back then, when you arrived as a group, you received a 3 hour guided tour around the park and our guide that day was a lady called Jean Valentine. She was 89 years old and a former WRNS (Women’s Royal Naval Service, called Wrens) and worked at Bletchley Park during WW2, working on the Bombe machine with Alan Turing when she was 19 years old in 1944. Her energy for an 89 year old (she didn’t look it) was amazing and because she worked there during the war, she told us these amazing inside stories about what it was like. The stories she really emphasised was how many of the Wrens used to break down with burnout and would be sent home to recover. In every month, the Wrens would work an 8 hour a day shift, 7 days a week for 3 weeks, then on the 4th week, they would work 3 days before 4 days’ rest.

At its height, 9000 people worked at Bletchley Park, of which two-thirds were women. Initially the men in charge had assumed that women were incapable of operating the Bombe machine, until the Wrens were brought in and took complete control of operating them. Most of the Wrens would have only been between 19-21 years old. Numerous women also worked on the actual codebreaking, such as Mavis Lever, Ruth Briggs and Margaret Rock who was mentioned by codebreaker Dilly Knox as “the fourth or fifth best codebreaker in the whole of the Enigma staff”.

On our recent visit, this was one thing that struck me from the day (particularly from the guided tour and the new Bombe exhibition in huts 11 and 11a), was that the park was appreciating more what the women did. Today Alan Turing is virtually a household name for what he did at Bletchley. Other codebreakers like Tommy Flowers, Bill Tutt, Dilly Knox and Gordon Welchman are known to some, but not all. But let’s also celebrate what the women at Bletchley Park did, people like Jean Valentine!

Have a look at this YouTube interview with Jean –