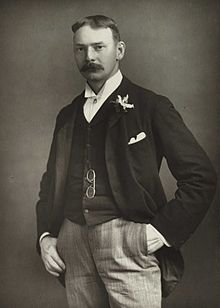 The young Jerome attended St Marylebone Grammar School, but the death of his father when he was 13 and of his mother when he was 15 forced him to quit his studies and find work to support himself. He was employed at the London and North Western Railway, initially collecting coal that fell along the railway, and he remained there for four years.

He tried to become a journalist, writing essays, satires, and short stories, but most of these were rejected. Finally, in 1885, he had some success with ‘On the Stage – and Off’ (1885), a comic memoir of his experiences with the acting troupe, followed by ‘Idle Thoughts of an Idle Fellow’ (1886), a collection of humorous essays which had previously appeared in the newly founded magazine, Home Chimes.

Jerome married in 1888, with the two-week honeymoon taking place on the Thames “in a little boat”, on the River Thames from Kingston upon Thames to Oxford and back to Kingston.

As soon as the couple returned from their honeymoon, Jerome set about writing a humorous book about himself and two of his friends going up the Thames and visiting the villages along the way. He named the book ‘Three Men In A Boat’. The villages haven’t changed today, with all the old pubs mentioned in the book still there.

What he said about the village of Clifton Hampden –

“Round Clifton Hampden, itself a wonderfully pretty village, old-fashioned, peaceful, and dainty with flowers, the river scenery is rich and beautiful”

“If you stay the night on land at Clifton, you cannot do better than put up at the “Barley Mow.” It is, without exception, I should say, the quaintest, most old-world inn up the river. It stands on the right of the bridge, quite away from the village. Its low-pitched gables and thatched roof and latticed windows give it quite a story-book appearance, while inside it is even still more once-upon-a-timeyfied.”

The book has never been out of print. Its popularity was such that the number of registered Thames boats went up fifty percent in the year following its publication, and it contributed significantly to the Thames becoming a tourist attraction.

In the first 20 years after being published, the book sold over 1 million copies.