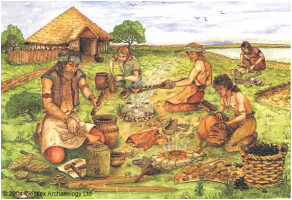 Ley lines are ancient, straight ‘paths’ or routes in the landscape which are believed to have spiritual significance.

The phrase was coined in 1921 by the amateur archaeologist Alfred Watkins, referring to supposed alignments of numerous places of geographical and historical interest, such as ancient monuments and megaliths, natural ridge-tops and water-fords. In his books Early British Trackways and The Old Straight Track, he sought to identify ancient trackways in the British landscape.

Watkins never attributed any supernatural significance to leys; he believed that they were simply pathways that had been used for trade or ceremonial purposes, very ancient in origin, possibly dating back to the Neolithic, certainly pre-Roman.

Of the places we visited on Saturday, 14 Ley Lines cross in the middle of the stone circle at Stonehenge.  Avebury, Silbury Hill and Uffington Hill (where we saw the white horse), all sit on Ley Lines.

The county of Wiltshire (where Stonehenge, Avebury & Silbury Hill sit) is the richest county in the UK for Neolithic sites.

One thought on “What are Ley Lines?”