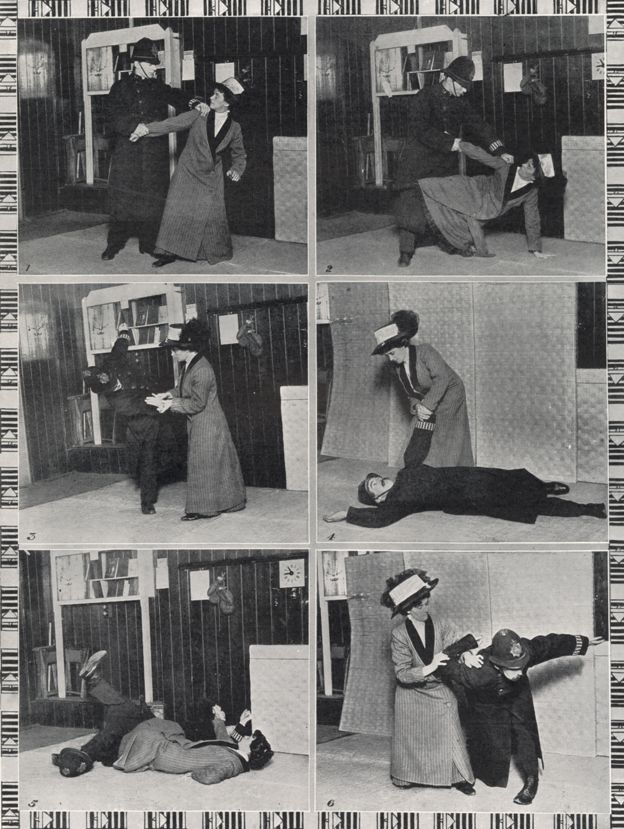 In 1899, the Garruds were introduced to the art of jujitsu by Edward William Barton-Wright. The Garruds popularised jujitsu by performing numerous exhibitions throughout London and by writing articles for magazines. Edith was one of the first martial arts instructors in the western world.

Suffragettes
From 1908, Edith also taught classes open only to members of the Suffrage movement.

In 1913, the government instituted the so-called Cat and Mouse Act whereby Suffragette leaders on hunger strikes could legally be released from jail in order to recover their health and then re-arrested on the original charge.
The WSPU responded by establishing a thirty-member, all-woman protection unit referred to as “the Bodyguard”, the “Jiujitsuffragettes” and the “Amazons”, to protect fugitive suffragettes from re-arrest.

Edith Garrud became the trainer of the Bodyguard and taught them jujutsu and the use of Indian clubs as defensive weapons. Their lessons took place in a succession of secret locations to avoid the attention of the police. The Bodyguard fought a number of well-publicised hand-to-hand combats with police officers who were attempting to arrest their leaders. Edith not only taught other suffragettes, she became part of “the Bodyguard”, considering she was only 4ft 11in tall, she could easily take on a Policeman (required to be 5ft 10in tall at the time).

On several occasions “the Bodyguard” were also able to stage successful escapes and rescues, making use of tactics such as disguise and the use of decoys to confuse the police. A number of these incidents are described in the unpublished memoir of Bodyguard member Katherine “Kitty” Marshall, titled “Suffragette Escapes and Adventures”.

Journalists coined the term “suffrajitsu” – to describe their techniques of self-defence, sabotage and subterfuge.