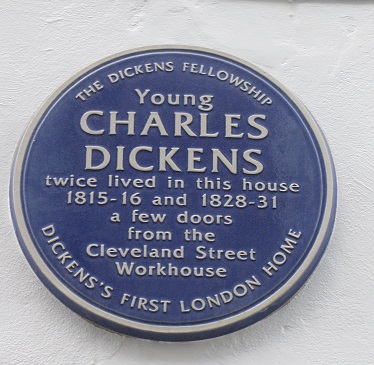 When Charles Dickens (1812 – 1870) was 12 years old, his family relocated from Kent to Camden Town in London.  The Dickens family were massively in debt and living beyond their means and so once in London, Charles father John Dickens was forced by his creditors into the Marshalsea Debtors’ prison in Southwark.

John was joined in prison by his wife and youngest children, which was normal at the time. Charles though didn’t join the rest of his family in Marshalsea, he boarded with a family friend in Camden.  He was forced to leave school and get a job to earn money for his lodgings and to make money to pay his fathers debts and thus get him out of the debtors’ prison.

Charles worked ten-hour days at Warren’s Blacking Warehouse, on Hungerford Stairs, near the present Charing Cross railway station, where he earned six shillings a week pasting labels on pots of boot blacking. The strenuous and often harsh working conditions made a lasting impression on Dickens and later influenced his fiction and essays. 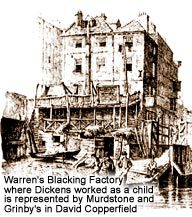 Charles walked to the Blacking factory from his lodgings in Camden every day, there and back (a round trip of 5 miles).  He would also often walk to Marshalsea prison at the end of his 10-hour shift to visit his family (another 2 mile walk).

A few months after his imprisonment, John Dickens’s mother, Elizabeth Dickens, died and bequeathed him £450. On the expectation of this legacy, Dickens was released from prison and paid off his debts.  But 12-year-old Charles was forced to continue working in the blacking factory and to financially support his family.