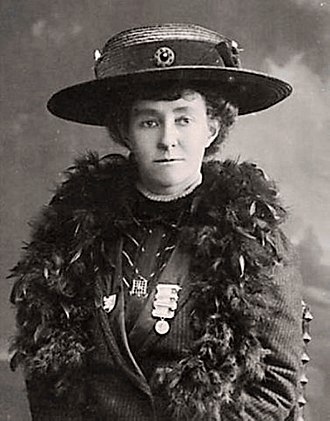 Emily Davison, the suffragette who was killed in 1913 aged 40 after throwing herself in front of King George V’s horse at the Epsom derby, is famously said to have secreted herself in the Houses of Parliament at the time of the 1911 Census in order to have herself enumerated within Westminster.

Emily joined the WSPU (Women’s Social & Political Union) in November 1906 and became an officer of the organisation and a chief steward during marches.  She soon became known in the organisation for her daring militant action; her tactics included breaking windows, throwing stones and setting fire to post boxes.

She broke into the Palace of Westminster on the 2nd April 1911 and hid overnight in a broom cupboard near the crypt of St Mary Undercroft (the chapel of the Palace of Westminster).  At the time, the 1911 census was taking place and she remained hidden overnight to avoid being entered onto the census; the attempt was part of a wider suffragette action to avoid being listed by the state.  The next day she was discovered and when she was asked for her postal address, she was able to say that it was the Houses of Parliament.

On the 1911 census, it records Davison’s postal address as ‘found hiding in Crypt of Westminster Hall’.

The actual historical documents that prove this is the case where found a few years ago and will perhaps throw some more light on this key moment in parliamentary history.  It is considered to be such a landmark event in British politics that a plaque was secretly installed in Parliament on the door of the cupboard she hid inside in honour of her rebellious act.  It was installed in 1991 by MP Tony Benn.