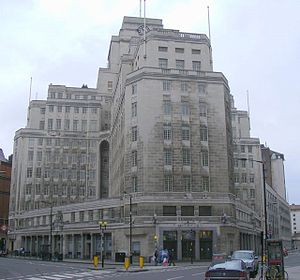 This iconic Art Deco 55 Broadway building was constructed in the 1930s to act as a headquarters for London Underground, and was designed by Charles Holden.

As usual, Holden wished to decorate the building in sculpture, and commissioned the leading artists of the day (including Henry Moore and Eric Gill), to decorate the outside of the building. To the consternation of many (still scandalised by his sculptures on the Strand, and the Rima nudity), Jacob Epstein was invited to submit two works: Day and Night.

The former, and most controversial, appears to show a rampant act of paedophilia. Legend has it that the smaller figure once bore a much longer penis, but this was truncated by Epstein after another bout of public outrage, and even offers of resignation from senior London Underground staff.

US-born Jacob Epstein (1880-1959) came to London in 1905 and became a British citizen in 1907. His sculptures can be seen on the outside of some buildings in London, with both the Tate Britain and the V&A having many of the busts he created.

He was a colossal figure in 20th Century sculpture, with the word controversial, which could almost have been his middle name!