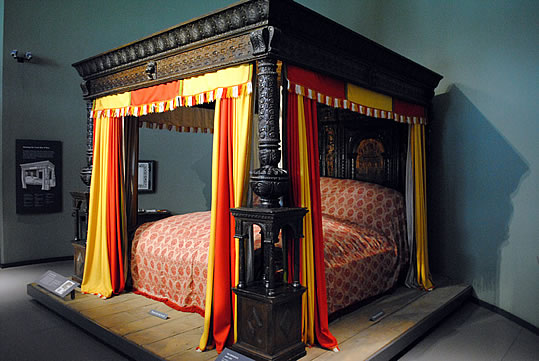 The Great Bed of Ware is an extremely large oak four poster bed which sits in room 57 of the V&A Museum.

It was built by a Hertfordshire carpenter called Jonas Fosbrooke in 1590 and measures 3.38m long and 3.26m wide. The bed was originally in the White House Inn in the town of Ware, England and moved around various other inns in the town up to 1870, when it was purchased by a William Henry Teale who installed it in his own house. The bed was sold in 1931 and purchased by the V&A Museum.

Beds in the 16th century were a luxury that were treasured, which is why the Great Bed of Ware was passed around and thus survived to the present day.

How beds were built back then gave us the saying ‘Sleep Tight’ (which you say to someone before they go to bed), as they did not have box springs back then, but instead had ropes tied tightly underneath the mattress to keep it firm and tight, hence the phrase. The ropes would have to be tightened fairly regularly, otherwise you would end up falling into the sag in the middle of the bed!

In the 16th century, it was recommended that someone should sleep seven to nine hours a day, but this depended upon individual body types and too much or too little sleep could cause dangerous imbalances and lead to illness, so ‘Sleeping Tight’ was very important! 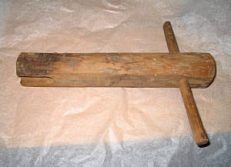 Tool used to tighten the ropes.