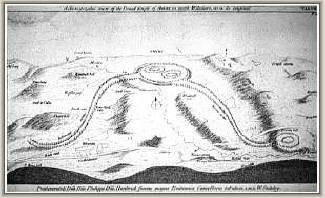 John Aubrey (1626-1697) was an antiquary and pioneer archaeologist who recorded numerous stone monuments in southern England.  William Stukeley (1687-1765) was a clergyman who pioneered the archaeological investigation of the monuments of Stonehenge and Avebury.

On 7 January 1649, John Aubrey was out hunting with friends when he chanced upon a north Wiltshire village.  What he stumbled upon there – and more importantly recognised – were the remains of an ancient earthwork containing a series of stone circles and settings.  Fields, houses, gardens and even inns had been laid out within the bank and ditch and many stones that we see upright today lay buried (it would be another three hundred years before they were re-erected).

Eventually his interest in the monuments was to lead to a visit by King Charles II in 1663. Aubrey, who sadly died in poverty in 1697, made drawings of what he found at Avebury which are now invaluable to modern researchers.

Some 70 years later, during the first part of the 18th Century, William Stukeley became the antiquarian who devoted his time to Avebury and so much of what is known about the more recent history is attributable to him. Not only did he chronicle his visits he also drew much of what he saw. He believed the stones were built to be a representation of a giant serpent, with his findings at Avebury were published in 1743 in his “Abury, A Temple of the British Druids”. It is his illustrations and records that have proved so valuable in helping us realize what a magnificent and extensive undertaking the Avebury monuments were.

During Stukeley’s visits to Avebury he had to witness much of the unforgivable destruction that took place at that time and today comparing Aubrey’s and Stukeley’s notes, they reveal the amount of stones that disappeared by the time Stukeley visited.  For example Aubrey records that there were 20 stones in the Southern Inner Circle whereas Stukeley only found 5.

One thought on “The Monuments Men!”